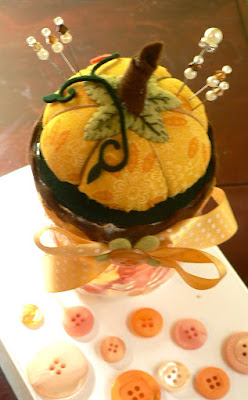 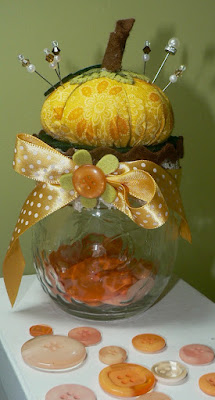 Instead of making a card this time, I made a 'whimsy' jar. I thought it would be interesting to recreate the inspiration photo as a pincushion. I originally got the idea for a pincushion whimsy jar from a pinterest photo Melissa Phillips had on her blog of a place in England that sold pincushion jars--basically recycled jam jars with a pincushion on top that makes a neat little sewing jar. Store the pins inside the jar, use the pincushion on top when you're sewing.

Rather than pay someone more than $20 for something I thought I could make myself, I tried it. This is my second attempt at this type of jar, the first one I posted about a week ago and I learned that if you tie the pincushion into sections with thread, like I did to mimic the pumpkin, then it doesn't lie as flush on the jar lid as the version that isn't tied. So just a tip there if you decide you'd like to try making one.

So no stamping on my project, but definitely burnt fingertips from the glue gun.

Oh, this is fabulous! I love this idea!!

What a great idea. Love it!

What an adorable idea. Thanks for sharing!!!

This IS adorable!! What a cute idea!!

What a great way to make buttons even cuter, and meet the PTI Blog Hop challenge too! Very creative!

I love it!! Did you make your own stick pins...and if so, what do you use? I have pins,but they are plain. Do you use beads from the jewelry department? I really like your pumpkin!!

This is so wonderful. I love the entire concept, and especially how you really made the pincushion look like a pumpkin. Great unique take on the challenge.

What an amazing project!

What a cute idea. I would have to put buttons in the jar.

This is AMAZING! Definitely something that would sell for a nice sum in a wonderful little boutique. I am in awe of your creative talent and I am pinning this! Hugs, Cammie

Wow! One of the best projects all day! Love this!

This is just SO cute, and so clever! It would make such a sweet gift. I love it!

oh my goodness, this is beautiful!

Love that pumpkin pin cushion! Great idea. Glad to see that someone made some other project than just a card....

OMG, how beautiful & creative is this?! I love it!

Wow! I am amazed when someone tries something totally different. Great job. Love your fabric.

Absolutely gorgeous, and it will be so much fun to use!

can I just say WOW! Its gorgeous!

AMAZING! love all the stitching and details. Great work, Peggy!

fabulous take of the challenge.

I love this! Sorry about your fingers.I find it hard not to mess with the glue too. ;)

Peggysue, that pin cushion is a-dor-able! I just love how it looks tucked in the top of the button jar! Such a sweet gift idea!

Love it! What a fun project, and so perfect for this challenge. Very nice. ;-)

Wow--what a fabulous creation! Your pumpkin pincushion is adorable. Love it!

How amazing and fun your challenge is!!!!! Love the pumpkin and the function of your pin cushion...and a great way to save buttons!

Oh my, I heart that jar! What a fabulous idea Peggysuez! TFS 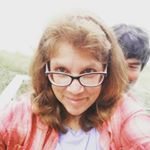 Welcome to "Roses by my Window,” a place where I can share my creative journey and hopefully add a little beauty to the world. I love the Lord and love my family. I also knit and bake but here I’ll be sharing cards, trying new stamping techniques and attempting to improve even a wee bit each time I hit the craft table. Thanks for stopping to have a look!

Some blogs I visit